Last year I went to the Edinburgh International Book Festival with my husband. He was performing his usual duet as a show solo, as his brother was still recovering from a particularly nasty appendicitis. I went with him in support, tucking myself amongst the cheering 8-11 year olds as he talked about the magic of making comics. We caught some comedy, ate some Haggis, and generally had a right old caper. At the time I was still writing and editing The Book of Summers - five months away from publication. In the authors' yurt (of all the very fine things about the Edinburgh Book Festival, it may just be the finest) I felt vaguely like an interloper; legitimate author WAG, sure, but not quite yet the real deal. Well, this year it was different. For the 2012 Festival Bobby and I travelled to Edinburgh together. Whether it was generous programme planning or just serendipity we had events on the same day. How very fine, to be making my literary festival debut* in the company of my husband... 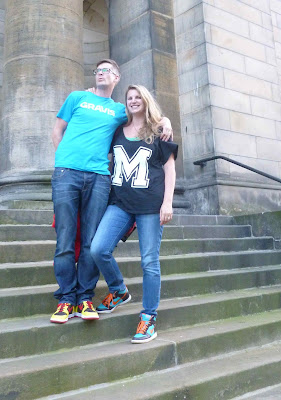 ... and his lil' bro Lorenzo, of course. As well as the public and schools' programme, The Etherington Brothers were taking part in the Festival's Outreach programme, and over the course of three days they performed five shows to nearly 1,000 children, amassing far more knuckle-bumps and crazed hoots of laughter than I could ever hope for. 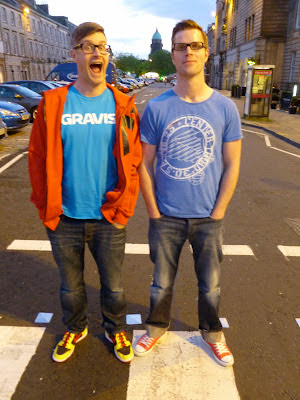 August is a magical time to be in Edinburgh, and we couldn't come to the Book Festival without catching a show at the Fringe. The essence this year? Variety. Earlier in the day I'd been to see Suzanne Joinson and Greg Baxter talk about their books, A Lady Cyclist's Guide to Kashgar (which I recently read and loved) and The Apartment (which I'm now very keen to read), and also Mark Haddon in conversation with Claire Armistead, which was as entertaining as it was inspiring. That evening, we ventured into the thick of the city-wide party and saw the inimitable Tom Thum. If you think you know beat-boxing (and I'm not sure I did, not really) then... think again. He takes it to a whole other level. It's ear-boggling. The next time my neighbours blast their foundation-shaking dubstep bass lines just as I'm settling in to a nice afternoon's writing I shall close my eyes and think of Tom Thum. I'll pretend he's next door practising a new sound. I'll probably smile. 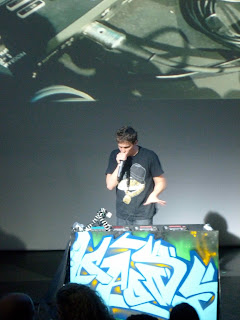 My event, 'Family Dramas Exposed', was with Karl Ove Knausgaard, whose book A Death In The Family (just published here in translation) is, in Norway, a huge bestseller, and the stuff of watercooler chat and newspaper headlines. I'd just finished reading A Death In The Family before I went to Edinburgh and found it utterly fascinating. It's an examination of the author's relationship with his father, and the repercussions of his death; profound, and unflinchingly honest. Amidst the intensity it also has some brilliant bits where a teenage Karl Ove roams the Norwegian countryside with a plastic bag of beers looking for a party, or tries to get a gig with his startlingly-mediocre band at a shopping centre. Our event was a sell-out, and chaired by the very lovely Jenny Brown, who made the whole thing feel easy - a minor miracle considering how nervous I felt beforehand. We talked about capturing the lost days of childhood, attempting to understand the actions of even the most flawed characters, and how parents can really mess things up for their children (á la Philip Larkin). Afterwards we got to meet some of the brilliantly receptive audience and sign books. Then Karl Ove and I signed books for one another (he'd read The Book of Summers, which I really didn't expect). It was a real honour to share a stage with him - a perfect first lit fest experience. 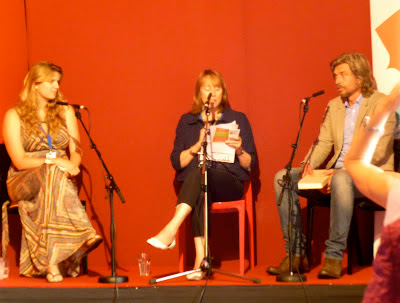 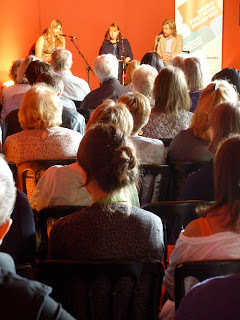 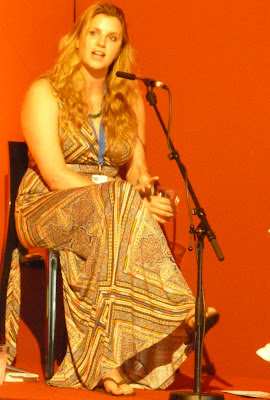 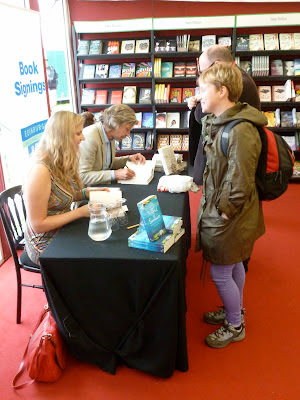 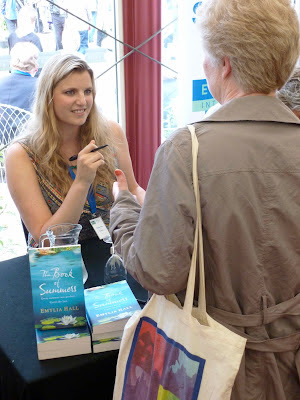 I also read as part of the Amnesty International Imprisoned Writers series, along with Jane Rogers and Edinburgh's 'Makar' (poet laureate) Ron Butlin. Most of us writers use the word 'freedom' lightly, it is, in a manner of speaking, our stock-in-trade; the freedom to imagine, to create, to cheat time and space. Reading for Amnesty was a reminder that we should never take it for granted; that freedom should be celebrated, fought for, and pursued at all costs. My piece was by the Zimbabwean journalist Bright Chibvuri, who was arrested in 2007 on allegations of practising journalism without accreditation. The event was titled 'Workers Rights are Human Rights' and it was great to see how packed the space was, and how much support there was for Amnesty. 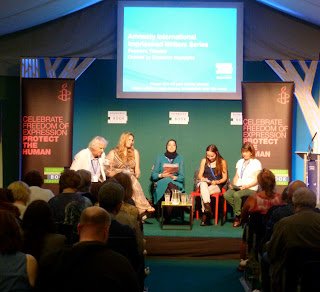 One of the really fun things about Edinburgh was having time to hang out with my agent and the lovely gang from my publisher, Headline. Special thanks to Rowan, Leah, Vicky, and Ben (who somehow managed to talk me onto the billing - special hurrah for him). Remember that feeling I mentioned, of being an interloper? It hadn't altogether gone away. Flicking through the Festival programme, glancing surreptitiously around the Yurt, seeing the snaking queues for some events - the Festival was full of living legends and I felt incredibly lucky to be there. Thank you, Edinburgh, you were memorable in all of the right ways. Until next year - as writer or reader or, with a bit of luck - both. 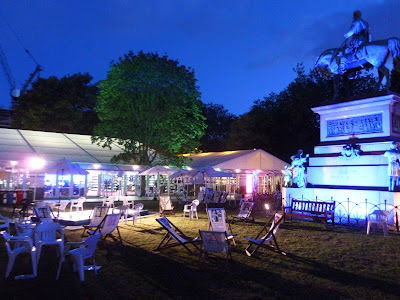 *As a debut novelist at the Festival, The Book of Summers is entered into the Anobii First Book Award. If you'd like to vote for me (oh, please do!) then go HERE and just follow the links. Thank you x

Back in January I blogged about my new favourite ad. Now there's a few more vying for that title, so here's a round-up from the UK, the US, and Spain. Big thanks to Headline and MIRA for these oh-so-summery splashes. 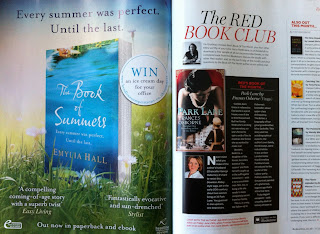 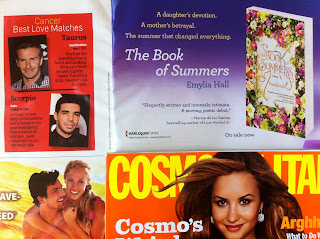 As to the aeroplane that flew over the beaches of Málaga the other weekend, trailing an El libro de los veranos banner... that's the work of my Spanish publisher Suma de letras. Muchas gracias. Brilliantly, brilliantly loco! 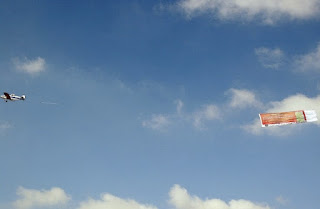 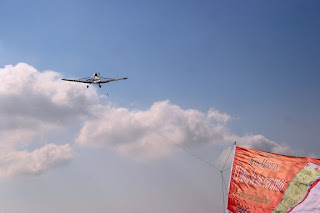 It's the holiday reading season, and I've been warning the lovely people over at Book Slam about the oft overlooked perils of this most enjoyable of pastimes. We're talking the Intellectual Overstretch, Destination Envy, Cultural/ Environmental Mismatch and, most crucially, Delicious Upheaval. Maybe you should take heed too... read it HERE.

The Book of Summers has been voted readers' favourite in the Richard and Judy Summer Book Club poll! Thank you SO much to everyone who voted - you've made my already brilliant summer even better. 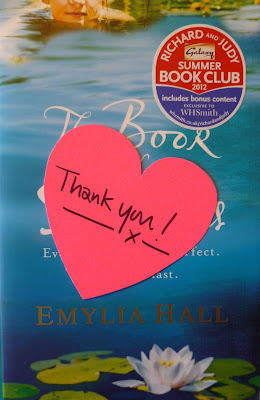 I feel very lucky to have been chosen for the club in the first place, and to know that readers cared enough to vote is really something. Again - thank you.

You can read more about the vote on the R&J site, and also in The Bookseller. And if you want to catch the video interview or podcast again, you can do so HERE and HERE.

Hurrah for R&J, and especially the readers!
Posted by Emylia Hall at 11:08

On the Spanish website enfemenino.com, for a few brief moments, El libro de los veranos was bigger news than RPattz and KStew. That's a flashbulb moment. Or a screengrab moment. 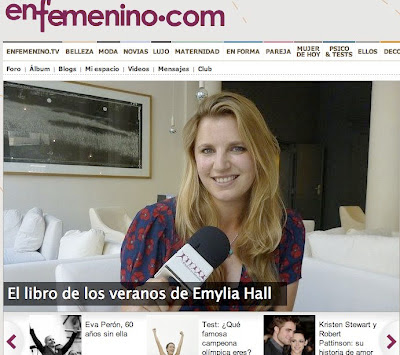 Your Summer needs you 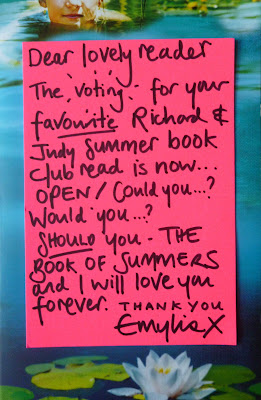 A few weeks ago I excitedly blogged about The Book of Summers being chosen for the Richard and Judy Summer Book Club. Now we're at the point where everyone gets to vote for their favourite read. You've only got until Noon this Friday to get your vote in.

To vote for The Book of Summers go HERE (please!).


(... and if you'd like to watch my interview with the legendary R&J... it's HERE.)
Posted by Emylia Hall at 19:32
Newer Posts Older Posts Home
Subscribe to: Posts (Atom)