The first line of one of my favourite books goes like this… If you really want to hear about it, the first thing you'll probably want to know is where I was born, and what my lousy childhood was like, and how my parents were occupied and all before they had me, and all that David Copperfield kind of crap, but I don't feel like going into it. Well, Calvin Jack Etherington, this is your mother speaking, and I do feel like going into it… I've a few years yet before you can tell me I'm embarrassing you.

waters broke. I was on the 4.30pm train from London Paddington to Bristol Temple Meads. I hid in the toilet, an intermittent mobile signal thwarting my attempts to Google what I thought was happening, and what I hoped wasn't, cutting me off when I was on hold on the hospital switchboard, and as I tried to reach your dad. More commuters piled in at Reading, shaking the locked toilet door, and all I could think was this is all too soon, he's only 35 and a half weeks, I've only been to one antenatal class, I've left a half-eaten melon salad in seat B39. As the train inched on towards Bristol, a steward called Gail, a kind and calming mother of five, offered bottles of water and gentle pep-talk. By the end of the journey the hospital knew we were coming. You knew you were coming. As the contractions started, I began to believe it too.

You were born the following morning at St Michael's hospital, 9.36am on Thursday 6th February. You were four and a half weeks early, and weighed 5lb 12oz. When you came into the world you were a vivid purple, a mass of gangly arms and legs. You didn't shriek, rather you mewled delicately, and as you were laid gently on my chest I looked down at your powdered, ancient face and said hello, oh hello. Beside me your father dissolved into tears, but I, the easy crier of the family, didn't, not straight away. Instead I lay still, my fingers woven through your dad's, my other hand clinging to you, as though we three were the sole survivors of a shipwreck. My own weeping came later… In the long dark nights on the ward, all nine of them, holding onto you and your dear life, and loving every gram of you, fiercely, breathlessly. I cried when they placed you in a blue-light tank, a papery superhero mask covering your eyes. I cried as you lay in a cot beside me, the pair of us side by side, as if two invalids, me tweaking your ear or stroking your cheek, waiting for the reassurance of your shallow breath, your woodland critter's snuffle. I cried every evening when your dad had to leave, as he kissed us both goodbye with love and pride and sorrow and reluctance, and we huddled together beneath a halo of lamplight, behind the ward's blue curtain, lost in our world of two. I cried as I gave you breast milk by nought point nought millilitres, catching precious drops in a syringe, trundling that undignified pumping kit down the corridor in my dressing gown, watching you scream and flail at my chest as neither of us could get what we wanted but we both tried so hard. For the nine days we were kept in hospital we couldn't have been looked after better, but, oh, how we wanted to come home. We knew what we had to do to get there. We timed every feed, me blowing air across your face and your daddy tickling your feet, whispering encouragement, anything to keep you awake and sucking, so we could place a tick on your chart, see the midwives nod and smile, watch the arm on the scales swing ever forward. And we did it together, in the end, as though we'd forged a pact. On Valentine's night, after an eternity, after no time at all, we dressed you in a tiny snowsuit that was far too big, and your father drove us home through the wind and rain. Kate Clanchy's poem Driving Home describes this moment better than I ever could (I'm indebted to Ali Reynolds for introducing me to Clanchy's work, her collection Newborn is sublime). 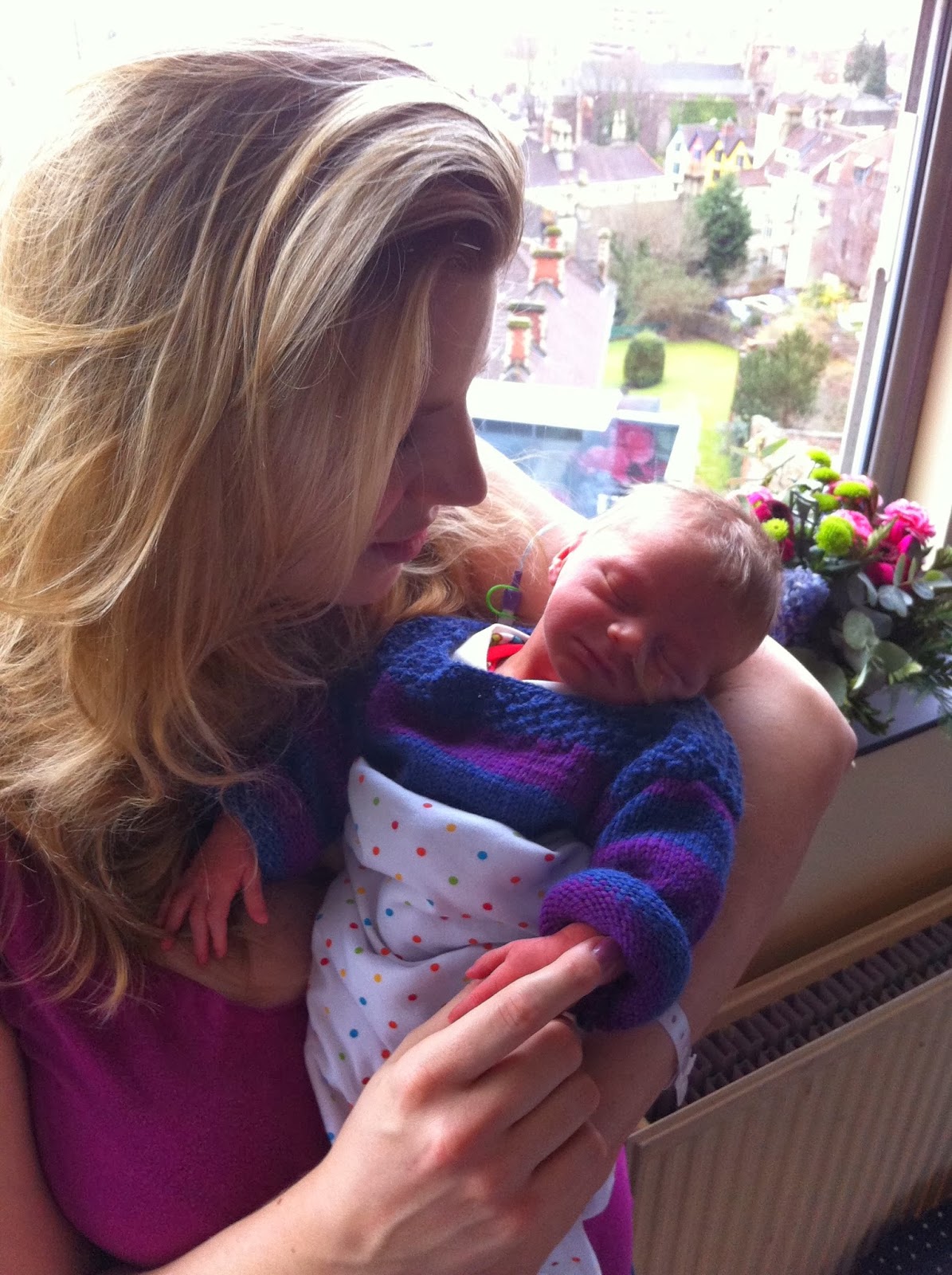 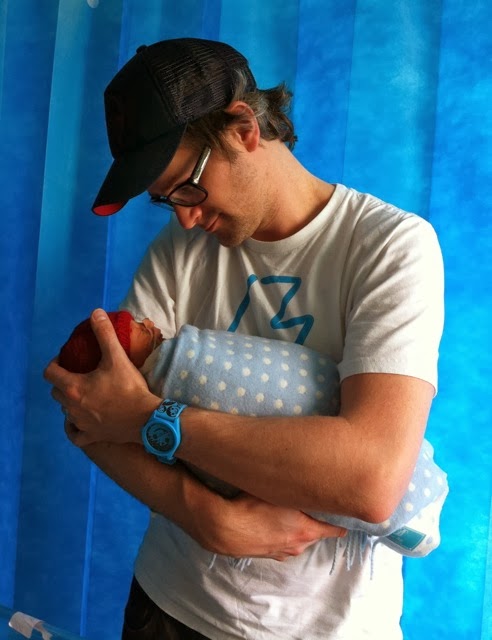 You're just over two weeks old now, and yesterday you weighed 6lb 4oz. Satisfyingly, wondrously, you are plumping up, although your cheeks and shoulders are still covered in the fairest down of the premature. Your eyes are blue-black, and as they rove left and right and up and down, now and again they alight on us and we melt, ogling you right back. We sing you nonsense songs, old songs, re-made new songs, and sometimes you look like as though you're smiling. Milk-drunk, white-lipped, you gurgle, your head swaying, and we drop kisses on your full belly. After those tube-fed, jaundiced, drowsy days, you've become an awesomely greedy guzzler, gulping ferociously, then hiccuping, erupting occasionally from the top or bottom with the volume of a being twenty times your size. For a light thing, you're a heavy sleeper - as we whoop at the highlights of the Winter Olympics in the wee small hours of the morning you barely stir… until we try and place you in your moses basket, that is, and then you wave your arms like a modern dancer, you snicker, and then you roar, so we scoop you back up, lay kisses on your warm head, your spun-gold hair, and hold you close. We promise to always hold you close. 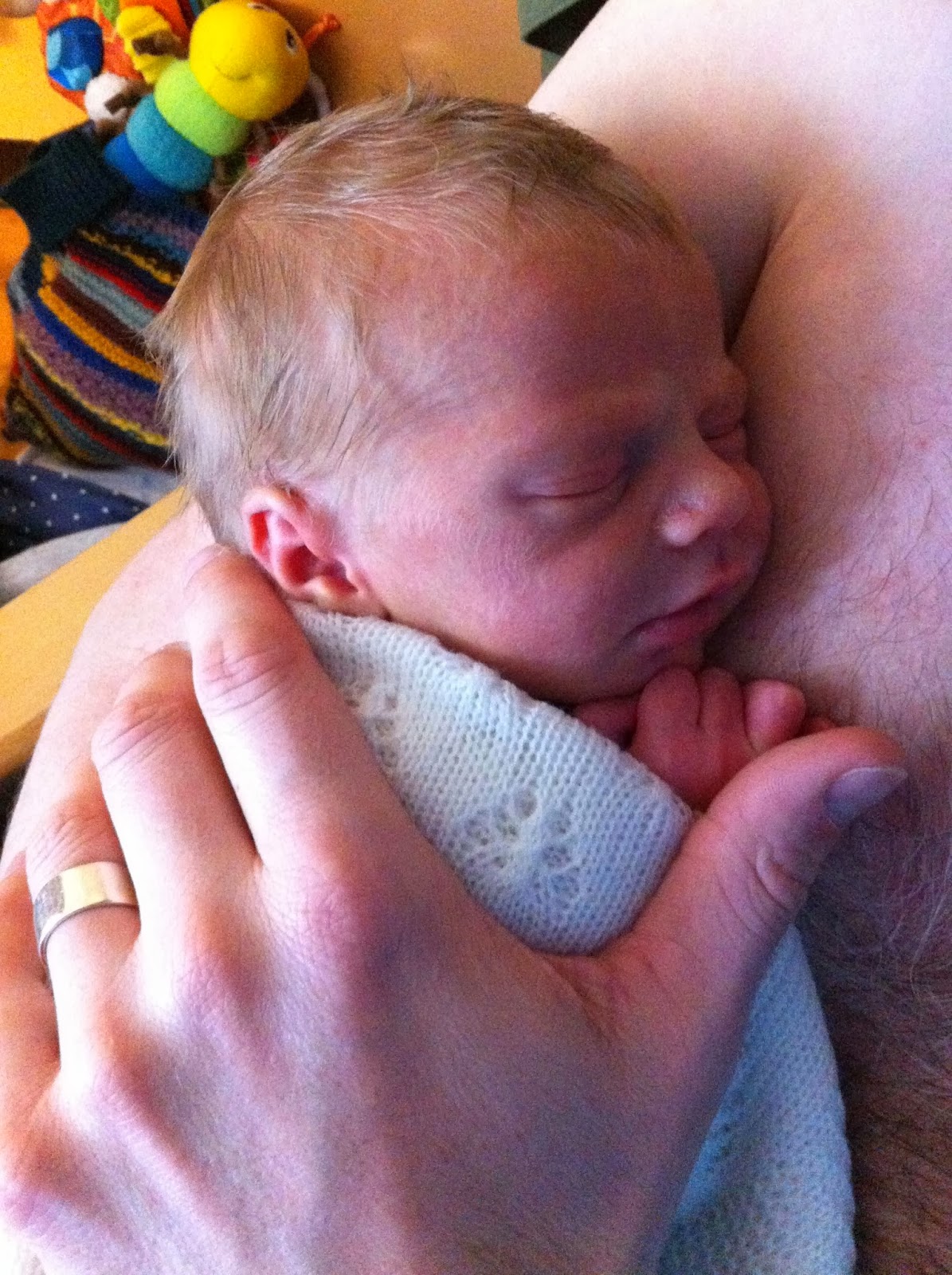 CJ, here is a song I played you on the first day that you woke up in our home. The line 'I danced myself right out the womb, is it strange to dance so soon?' belongs to you, don't you think?

And here is a book. As your namesake says, 'it's a magical world, Hobbes ol' buddy… let's go exploring!' 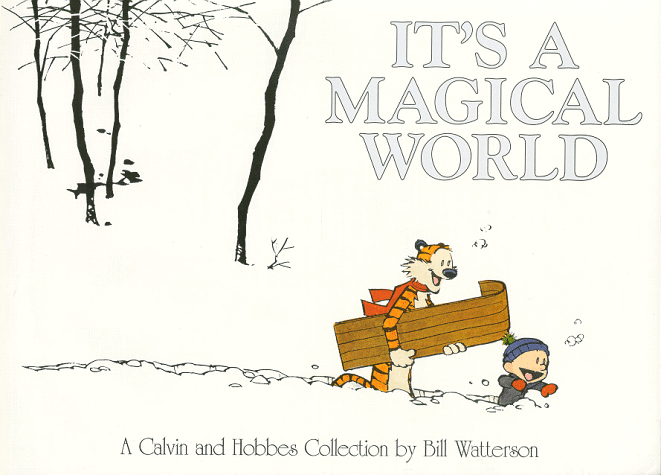 From the moment you arrived, Calvin Jack, our world has grown infinitesimally more magical, and your dad and I can't wait to go exploring with you. If your first days on earth are anything to go by, I think you'll be the one showing us the way.