The last few weeks have been beautifully eventful. At the end of April, the day after I returned from Budapest, I took part in the Stratford-upon-Avon Literary Festival. It was my first time in Shakespeare's town, and the venue where my How To Get Published event was taking place - with authors Hilary Boyd and Michelle Heatley - was within the hallowed walls of the Shakespeare Centre, smack next door to the house where Will was born. For the panel we each talked about our different routes to publication, and enjoyed keen questions from an audience that was largely made-up of aspiring writers. That evening, still in Stratford, I had the delight of meeting up with Susan Fletcher, whose incredibly beautiful fourth novel, The Silver Dark Sea, came out last summer. There's no contemporary writer that I admire more than Susan Fletcher. Her prose sings with poetry, and her stories are always intimate, spirited, and soulful. It was such a pleasure to hole up at The Dirty Duck with her and talk all things writing. I rode the train back to Bristol glowing. I mean glowing.

Next up was Fowey Festival (the Du Maurier Festival, as was) in mid-May, and a hugely fun panel with Shelley Harris (author of Jubilee), Ginny Baily (author of Africa Junction), agent Maggie Philips, and chaired by Professor Helen Taylor. Our subject, Confessions of First Novelists, made for lively discussion. It was a treat to be reunited with Helen and Shelley, with whom I so enjoyed Appledore Festival last autumn. Our short stay in Fowey was cram-packed with extra-curricular fun; pitch-black woodland rambles, moon-lit paddling, scones with lashings of cream and homemade jam, sunny strolls alongside the dazzling waters of the river Foy and Readymoney Cove. 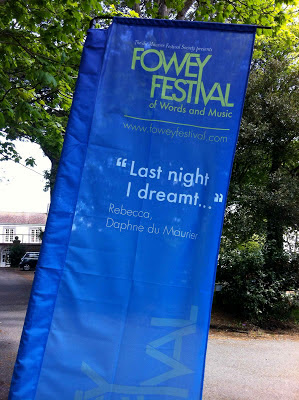 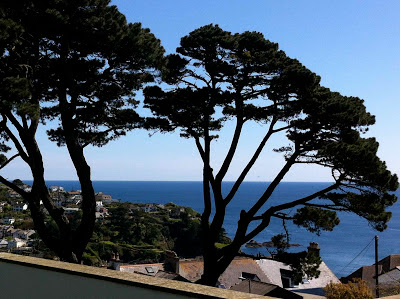 All in all the Fowey Festival was a brilliantly scenic and pleasurable experience, made all the lovelier for the Daphne du Maurier connection. Rebecca is a favourite book, and I've long been an admirer of du Maurier's writing. Being in Fowey, the heart and home of so much of her work, was thoroughly inspirational. I'm always interested in writers who set their store by place, and I couldn't resist a touristy stop-off to buy a Daphne postcard. I love the quote on the back; 'Here was the freedom I desired, long sought for, not yet known. Freedom to write, to walk, to wander, freedom to climb hills, to pull a boat, to be alone.' Given my liking for stealing away to scenic spots to write on my own, I'm eyeing Fowey for my next such trip... 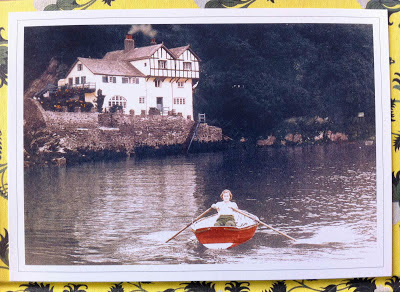 From Fowey to Hay, then. My husband and his bro, comic book creators The Etherington Brothers, were appearing as part of the Hay Fever Programme and I got to go along with them. They were hot off a tour with the Scottish Book Trust, meaning that by the time our three days in Hay were up, a whopping 3,700 children had seen their show. My duties at the Festival were solely photographic... The boys had me nip on to the stage to take a snap of their biggest ever live audience - 900 eleven and twelve year-olds. Here's what that looks like... 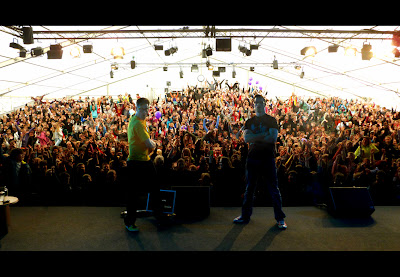 When I wasn't hanging with Robin and Lorenzo - or meeting some of the very interesting people that a town like Hay throws your way - I was happily lost in the many bookshops, or tucked in a café corner with a notebook, feeling my way into the first pages of what will be my third book. Being out and about the last few weeks has been perfectly inspiring and a whole lot of fun, but now, as we roll towards summer, I'm ready to close the door to my writing room, open up the window, sit down at my desk... and write.
Posted by Emylia Hall at 15:29

No sooner have I finished my second book... Well, I'm starting to think, tentatively, about what I'm writing next... and I wrote about how THAT feels for Book Slam... Go HERE to read about winds of inspiration, thought-provoking foxes, and why, when it comes to a blank page and the perilous setting down of first words, it's Hemingway who has the last word.

A Heart Bent Out of Shape - sneak peek

My publisher, Headline, have made some quite beautiful proof copies of A Heart Bent Out of Shape. The hardback cover will look a little different, but the feeling evoked by the design - for these advance copies, and the finished thing - is absolutely right. Roll on September, say I... 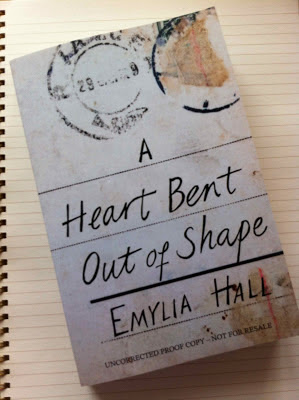 Amidst the wonders of sumptuous cake, dazzling shop windows, and general jaunting about Budapest, I also took part in the European First Novel Festival. The Budapest International Book Festival has been in existence for some twenty years, but the First Novel Fest is somewhat newer (fittingly). This year writers from Bulgaria, Hungary, Holland, France, Italy, Scotland, Slovenia, Switzerland, Slovakia, Finland, Norway, Cyprus, Poland, Portugal, Denmark, Austria, Germany, Czech Republic, Israel, and England (me!) took part. And what a brilliantly eclectic group we were; different ages, backgrounds, concerns, but the shared experience of having recently released our first novels... 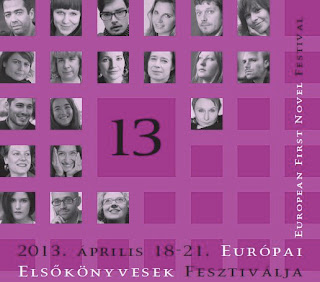 The setting for our meets and panels was Millenáris, a cultural centre and green space in the heart of Buda. The site was once home to an electrical factory, and something of this industrial spirit remains, with converted hangars and distinctly urban architecture (and rusted hunks of metal that could have been relics of a bygone era, or the modernest of art, who knows...). Anyway, it was cool. It felt a bit Berlin-y. And over the Festival weekend it was full of book-loving types sitting in the sunshine, beering and coffee-ing, and eating hot coils of sugared bread (Transylvanian 'Chimney Cake'). I also had a glimpse of it by night, after an evening reception for the Festival, where refreshments came in the form of award winning vintages from Hungary's foremost winegrower, and a dazzling buffet that included, amongst many other favourite dishes, a celestially-good Paprika Chicken. By night, the whole park rang with the croaking of frogs, an insanely vociferous chorus. A sound that was only drowned out, momentarily, by a man leaving our party and howling at the moon - the walking embodiment of the tortured artist. Lovely stuff. 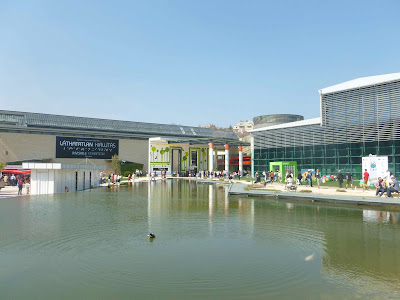 Inside two of the main halls, the Book Festival was in full swing, with exhibitors from all over Hungary and Europe, as well as a full programme of events. My publisher Park's stand became our meeting point for the weekend. It was fab to see the stacks of Nyarak Könyve, and I only regret not trying to nab one of the beautiful posters made for the occasion, using one of the Polaroid-style images from the UK hardback. My sunday launch was advertised on the stand, with bunches of gorgeous summer flowers. I was feeling a lot of Park love. 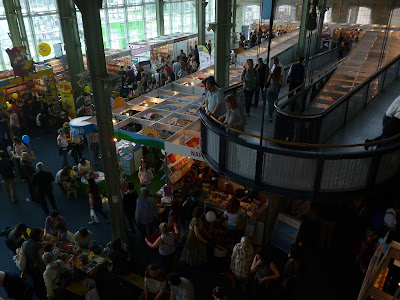 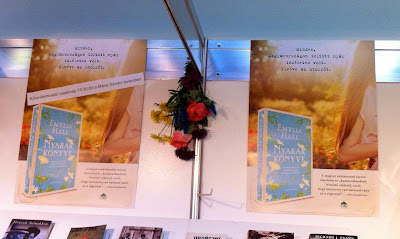 My first event was a panel on the subject of 'family', with writers from Poland, Hungary, Switzerland, Scotland, and Holland, and hosted by writer and critic Zsofia Ban. While our books were wildly different - from magic realism in a Serbian village to a tale of 'waiting' in a Dutch fishing town - we'd all written of family, in some form; fractured family, harmonious family, murderous family, loving family. It made for spirited discussion - luckily for me, the official language of the festival was English - and I couldn't help being humbled by the language skills of the other writers. 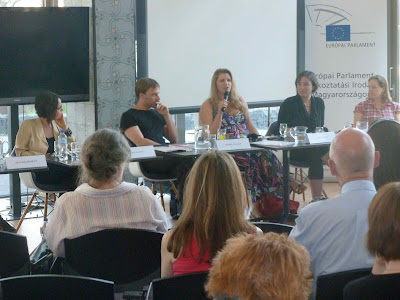 On the second day of the Festival I took part in a panel whose only theme was along the lines of 'you're all first time novelists... GO!' It worked brilliantly. The host was charismatic writer András Forgách, and he succeeded in spinning the conversation between all eight of us, ensuring everyone got the time to talk about their experiences, from quitting a job in a Czech McDonalds, to love in the time of French recession, to being a Danish soldier in Afghanistan. We compared stories of sudden inspiration striking (I was playing tennis and heard a seagull - true story), and debated the pros and cons of writing while listening to music (I voted yes - especially if it's the obsessive repeat playing of one album, teenage-style). Being invited to take part in the Festival was a real privilege, and this particular panel was one of the most enjoyable events I've ever done. 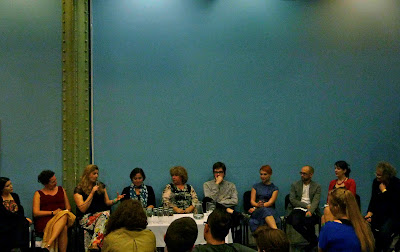 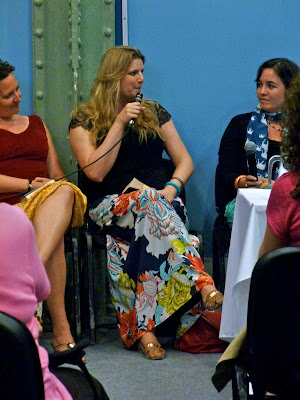 In a pause between interviews and events, Éva and Vera asked if I'd like a peek inside the Park offices, as they were located just a short walk from the Festival site. Steps from Millenáris Park, we found ourselves on a peaceful residential street, and stopped at a beautiful turn-of-the-century apartment block, complete with garden path and wooden balconies. I thought we were catching our breath - it was HOT - but no, tucked inside this glorious old building was the Park office, once the former workspace and home of celebrated architect Marcel Komor. Of the many aesthetically lovely things about my publisher's HQ - from the mezzanine galleries, to the shaded balconies, to the parquet floor - the intricately painted wooden ceiling is perhaps the most remarkable. 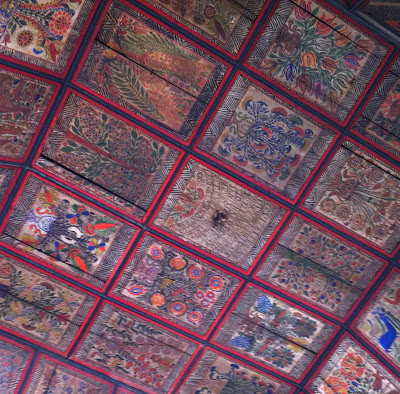 In every sense, The Book of Summers has found a very nice Hungarian home indeed. 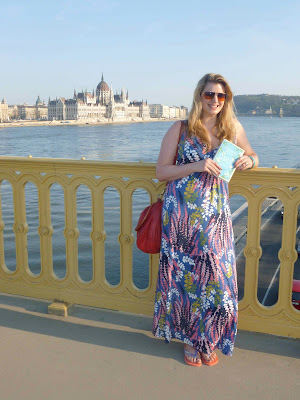