I’ve just returned from a week teaching for Arvon at Lumb Bank in Yorkshire. I took an Arvon course myself in 2008, and one of my tutors back then was Patrick Neate. I was working alongside Patrick this time, and for a nostalgic sap like me, well… let’s just say that set the tone for a pretty special week.

If it’s possible, I loved returning to Arvon to teach even more than I loved being there the first time around. Preparing for my workshops forced me to stop and think about process and craft in a way that’s easy to blast past when you’re entrenched in your own work. I realised I was re-inspiring myself - even before I got to Lumb Bank I was grateful, once again, for Arvon. It’s a privilege to be taken into the confidence of someone – the sharing, the listening, the discussion, what we write and why we write and who we write for – because even if we haven’t fully realised it ourselves yet, writing is about as personal as it gets. Last week it felt as though everyone at Lumb Bank gave it their all, and isn’t that as much as you could ever ask? I had a moment in a workshop when I looked around at those fifteen writers, their heads bent, pens touching paper – each of us wholly separate, but bound in the moment – and, I thought, you know what, right now, there’s no place on earth I’d rather be.

For over forty years Arvon has been giving people ‘the time and space to write’. For me, as a tutor, it offered the time and space (even amidst the busy workshop & tutorial schedule) to remember why I write. Something that can be all too easily forgotten when you’re chasing deadlines, and fretting book promo. When the thing that once felt to you extraordinary and precious is in danger of becoming, just sometimes, a little too much everyday. In fact, that was the very last written exercise that I set the group. Why Do You Write?  The looks on some people’s faces as they put down their pens showed that some kind of understanding, one that might previously have proved elusive, had been reached. Me? I know why I write. I write because life’s too amazing to live just once. Because somehow we’ve been gifted hearts and minds that permit us to transcend the order of things, so why wouldn’t we want to see where that takes us (even if, sometimes, it turns out to be just three streets over, drinking coffee instead of tea)? I write because it’s time travel, it’s hurtling through place and space, it’s kissing the one who got away, or the one you never knew existed. It’s the button that came off your skirt one day when you were five years old, and knowing that that button mattered – maybe because your mother sewed it on and she’s not around any more, or maybe because she is here but you don’t see enough of her, or maybe, actually, everything’s pretty fine between you and your mother, but for some reason you still find yourself caring about that button… In a world where even the things we think we have a good grip on tend to have a habit of, sooner or later, slipping away, writing them down feels like the one practical, magical thing that we can do to hold on tight. That’s why I write. It just took this week – with one other tutor, one guest, fifteen writers, centre staff and their dogs, together in a grand old house on the side of a hill – to remind me. And for that, dear Arvon, I’m eternally grateful.

A trip out west

I'm writing this from my hut. The wind blows hard down this line of back gardens, so on a blustery day like today I'm working to the tune of whistling and rustling  - the silver birch I can see from my window is caught in a swaying dance, while some other form of robust shrub is tapping against the wooden wall. Close my eyes, and I can fancy I'm on a cliff-top. I can hear the push and pull of the tide, its gusting roar. Open my eyes and the coast is still there - my desk has a new scattering of shells, gathered from Porthmeor and Sennen Cove, and my flip-flops (worn persistently) probably still carry the faintest traces of sand in their tread. New postcards are taped to my wall, souvenirs from seaside galleries. I'm just returned from a week's holiday in Cornwall. It was a trip that was the perfect mix of business and pleasure, thanks to it falling so close to the launch of The Sea Between Us. Here are my (Busman's) Holiday snaps, and a few words to go with them. 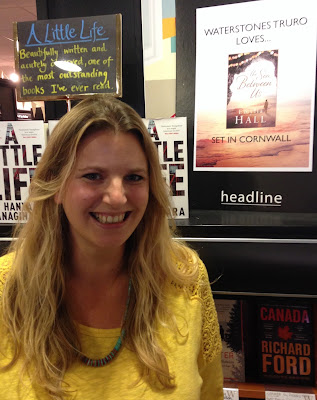 The excellent Waterstones Truro was our first stop in Cornwall - where I was thrilled to spot this poster. I signed a heap of books, while my little son oohed and aahed at their particularly colourful and inviting children's section. It was great to meet Libby too, and I'm grateful for their brilliant support for the book. 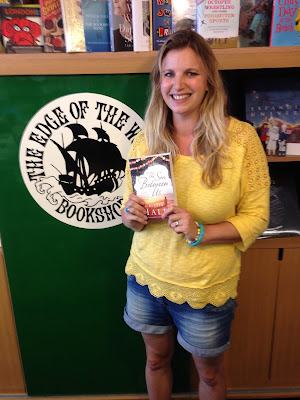 The Edge of the World Bookshop in Penzance, a town that features in my novel, was next. I signed another grand stack (thank you, guys!), while around me the shop buzzed with book buyers. James and Rachael have created a wonderful place, and it was inspiring to hear their story of settling in the west and setting up shop. 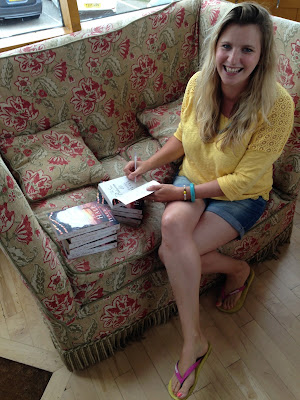 Next to The Old Coastguard in Mousehole, a hotel I stayed at on a writing retreat while working on The Sea Between Us. Their support has been amazing, buying copies of the book to go in guest rooms, selling it in reception, and choosing it as their first title for the brand new Old Coastguard Book Club (thank you Alice!). We ate good food, drank great wine, CJ charged about the palm-tree filled garden, and later we sank into bed feeling full and happy. 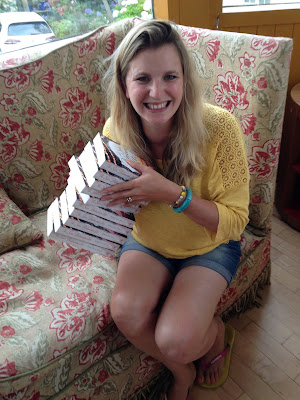 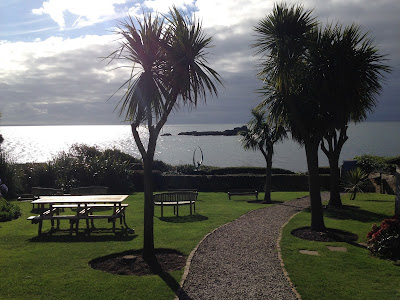 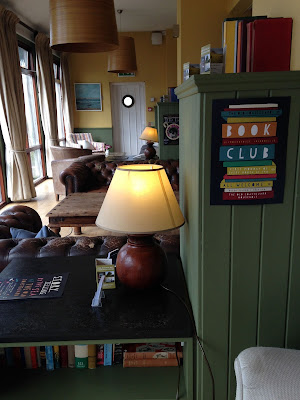 The next morning, after a stop-off at Sennen Cove for a windy beach walk (another location in my novel), we took the stunning road that runs around the north coast and across the moorland. The west at its wildest. 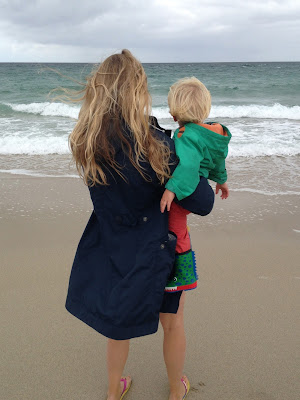 Thanks to the fortuitous spotting of a postcard at The Old Coastguard I'd discovered Kurt Jackson had a newly opened gallery in St Just. Jackson is one of my favourite artists, and I talk about him in the essay I wrote for the back pages of The Sea Between Us. I've several of his books at home, and when desk-bound in Bristol I'd stare into his seascapes to feel again the energy of the water, and try to put into words what he does so magnificently with a paintbrush. 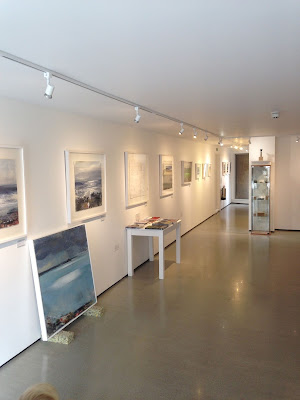 The Foundation was a beautiful space, and full of yet more beautiful work. I was thrilled to meet Kurt's daughter Zinzi at the gallery, and - somewhat bashfully - left her with a copy of my novel. After that happy encounter we had *amazing* cake and coffee in a cafe around the corner. CJ was more than content with his portion. I think I want to move to St Just. 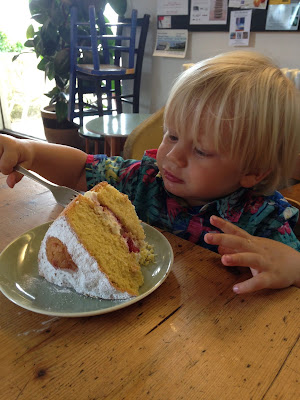 Our destination was St Ives, and we'd never approached it from this angle before. While still amidst rocks and ferns and rugged moorland we saw a sign that said St Ives 2 miles, then we were upon it, the glitter of water, the slate and granite glinting silver in the sun. We oohed and ahhed at the sight of the town, in the way of children catching their first glimpse of the sea. Our home for the week was on a hillside behind the Tate, our 3rd stay in the same cottage, and just seconds from one of my favourite beaches in the world - Porthmeor. 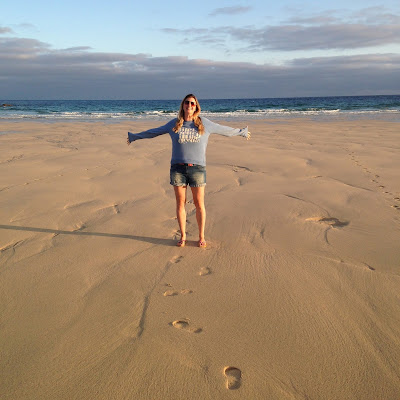 I wrote a piece for the WHSmith blog about writing as an extreme sport, and in it I mention bodyboarding, and messing about in the shallows with the pre-schoolers. We got some pretty big waves this week in St Ives, and while I'm a novice there was much whooping at waves caught, and some proper face-riding too. We went out every day, and it was altogether more thrilling than my one attempt at paddleboarding (something I've always fancied) - though admittedly 25mph gusts and choppy seas didn't make for the best (i.e. pretty treacherous) learning conditions - I stayed the course of the lesson but BOY were there moments when I wanted to chuck in the towel (or, rather, go running for one). 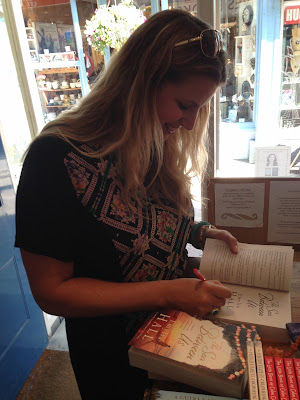 St Ives is home to a fabulous indie, St Ives Bookseller, and it was a real pleasure to meet Alice and her colleagues, and sign copies of the book (one of the benefits of staying locally was that when they sold out, I dropped in again and signed a new batch - woo hoo). I also picked up a couple of Cornish-set gems - I own a couple of different editions of Rebecca but couldn't resist this new one, and as to The Shell Seekers… I'm reading it now and it's utterly, utterly charming. 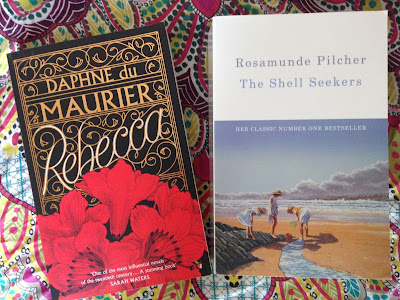 What else? CJ established himself as a total Beach Bum, never happier than when the water was in sight, his toes dug in the sand. We ate superlative paella at the Porthgwidden Beach Cafe (only my third evening out with my husband in 18 months… we were giddy). I scrambled through rock pools and braved slippery heights for a photo shoot one morning on the beach (for the Western Morning News - more on that soon). I had one of the best cakes ever at the West Beach Bakery - pumpkin and chocolate - gobbled down while still in my wetsuit early one brisk morning. I went to all my favourite galleries, and thought of Robyn in The Sea Between Us doing the same, her creative calling enlivened by everything about her, but most of all the ever-present sea. We saw the ocean early in the morning, where even in this town of dawn surfers and eager holidaymakers there was nobody else around save us and the gulls. We saw it in the dark, as it thundered on the beach, stones dragging and clattering. In full sunshine, the wind sending clouds speeding along the horizon line, white horses galloping towards the sand. Every time we had to leave the beach my little son turned and waved at the sea. For him it was a living thing, marvellous, ceaselessly entrancing, and deserving of his farewell. Plus, he really likes waving. 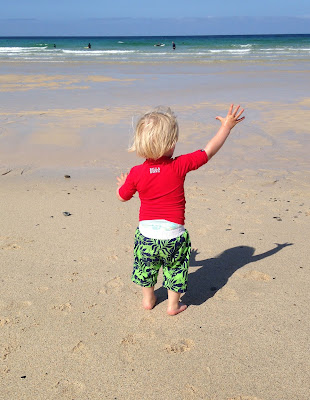 As holidays went, it was wonderful. As a trip to the spiritual home of a book I've written, one that's just published, the ink barely dry on the pages, it was… perfect - thanks to the brilliant support of booksellers, and the enthusiasm of people I met. Everywhere I looked the unending beauty of the coastline, and the beguiling mix of landscape, surf, and art, reminded me why I wanted to set a story there in the first place. The Emerson quote that The Sea Between Us begins with - live in the sunshine, swim the sea, drink the wild air's salubrity - well, we channelled that all week. Even on this windy (now raining - torrentially) day in Bristol, I'm channeling it still.