A Cornish scrapbook (& how writing made me seasick)

I've just returned from five days in Cornwall, holed up writing in Mousehole. I've always enjoyed including a self-styled writing retreat as part of my working process, booking a hotel for a few days, dinner, bed & breakfast for one. Tucked away in my room with a view (I'm a fan of choosing out-of-season pleasure spots, scenic and blissfully quiet) I write from dawn to dusk, keeping up a pace and focus that I could never manage at home. On retreat, I'm obedient, and all I think about is the job I'm there to do. It all began when I returned from an Arvon course five years ago, and I was raving to a friend about how much I loved thinking about nothing but writing for those days, the routine of it all, the almost-cult-ish atmosphere, and she said 'do you think you're easily institutionalised?'. And...  yes, I guess I am. At home my mind wanders all over the place, and although I stick more or less to a daily word count, it's only on these retreats that my work-in-progress manuscripts really start to feel like novels in the making. 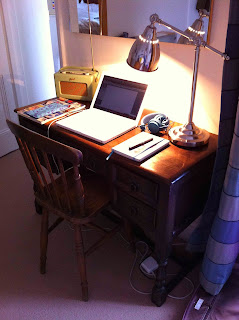 My writing desk in Mousehole

I'm working on my third book at the moment, and I'm aiming to have a first draft for my publisher in March. There is an added urgency to this deadline, as March is also when my baby is due (our first! A boy!). Book baby, and real baby, racing towards a March finish, one as a rough first draft, the other as a lovely, clean sheet. If I ever needed anything to make a deadline feel more real, I guess a baby is pretty much it... I spent much of my first trimester feeling bitterly sick. Everyone else was basking in the summer heatwave but I was tossed on tides of seasickness. I tried to write my way through it, thinking the distraction would be good, but that only seemed to make it worse. Far worse than I could have imagined at the time... because even once I was better, I couldn't shake the association between my third novel and feeling sick. All I had to do was think of the title, a character name, one of the scenes I'd written, and instant nausea ensued. A state of affairs that's about as inconvenient as it gets for a writer... your own work physically repulsing you. I wandered about in this way for several weeks, feeling perfectly perky and healthy, except when I sat down to write, then an itch began at the back of my throat and the room tipped... Anyway, it's a long-ish story, involving a week in St Ives, sweet-smelling surf wax, and a kick up the behind from my husband, but I rid myself of this crazy thing in the end... Suddenly I was back in the book, behind on all my schedules, but feeling excited about the story again, and, most importantly, actually feeling like I could sit down and write it. So I booked myself five days in Cornwall, and worked towards this retreat, the promise of it buoying me in the intervening weeks. 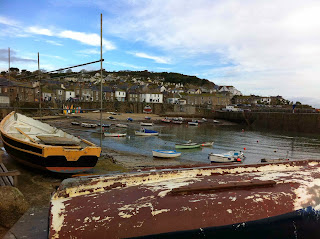 A break in the clouds over Mousehole (Mowzel) harbour

It was our third trip to Cornwall this year. Back in April my husband and I spent a week touring the Penwith peninsula, St Just, Sennen, Lamorna, Mousehole, St Ives, Penzance... We tramped along cliff-top paths, doused in sea-mist and drizzle. We climbed down slippery black rocks to reach a hidden cove, and kicked our way through freezing waves. I filled my pockets with seashells, took photographs, scribbled in notebooks, and let the wild West do its work; inspiring and invigorating. We returned at the end of the summer, spending a week in St Ives with my family, celebrating my dad's 70th birthday. We stayed in a house where, if we left by the front door, we fell into the twisting streets of the town, and if we tumbled out the back we were on the beach in seconds, in the shadow of the Tate, sunken in sand, watching learner surfers stack it. Then finally, my retreat to Mousehole, the most fitting place to huddle up in for a few days, ignore the world, and write. 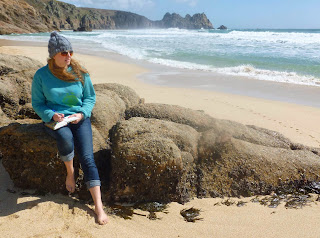 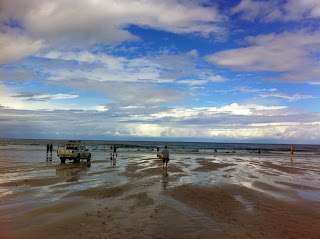 My third novel is mainly set in Cornwall, and for me it's essential to spend time in the place I'm writing about. With books based so far in Hungary and Switzerland, Cornwall, at first glance, might seem like a bit of a departure. I grew up in Devon, but Cornwall still felt like a world away, especially the Far West, with its rugged aspect, the contrast of russet moorland and white-sand beaches. Standing on the edge of a cliff top, the relentless tearing of the Atlantic ocean below, it feels like you're at the ends of the earth. It's a landscape that seems timeless, changeless, but is always on the move. It's a marvellous setting for a story. 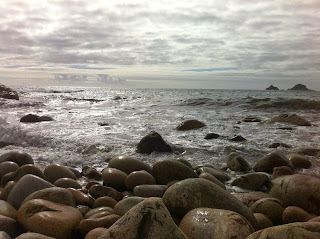 The 'hen's egg' cove, at the end of the Cot Valley 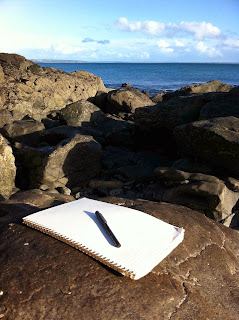 Scribbling on the rocks, Mousehole

I'm now hibernating for the winter, as my babies grow, book baby and real baby, while eyeing March with excitement and trepidation. I'll be channelling my Mousehole days, Penwith and St Ives, remembering how it felt to have the sea-wind slap my cheeks, the heart-lifting sight of streaked cloud and silver water, the sound of the ocean, in and out, in and out, as I lay in bed at night. Writing this book now feels exactly like the adventure I always wanted it to be. And while other adventures may lie in wait, unimaginable and very, very real, for now I'll enjoy this one. I'll lose myself in a new story, and think of Cornwall.