Notes to self - a Book Slam blog

Over on the Book Slam website I've written about writing and diaries, and writing diaries, and Writing Diaries... Go HERE to see why I agree with Joan.

In Changing My Mind, Zadie Smith's excellent collection of essays, the author talks about the feeling of finishing a novel. 'Who can find anything bad to say about the last day of a novel?' she writes, 'It's a feeling of happiness that knocks me clean out of adjectives'.

After living in a cocoon of editing for most of January, I sent my novel off to my editors on Friday. Was this the 'last day' that Smith writes about? Sort of. My manuscript and I have gone through two rounds of notes, and all that remains now are copy edits for UK and US. Do I feel so happy, like Smith, that I'm lost for adjectives? Not quite. Above all, I feel a little bit... strange. I've tried to dissect this feeling further, as I too expected out-and-out ecstasy, at least a bit of heel kicking and capering, but instead I poured a large glass of wine, sank into a bath, turned up my music loud enough to annoy the neighbours, and... felt strange.

Strange... because it's Lausanne. Back in November 2011, just as I was really getting stuck into the writing of A Heart Bent Out of Shape/The Swiss Affair, I wrote a blog about my 'golden city', the place I lived for a year while at university and have loved ever since. My story is set in Lausanne, and throughout its writing I felt the immense joy, and the considerable responsibility, of committing to paper a place that has lived in one's imagination for so long. Lausanne isn't just a setting for a novel, a city plucked from Google Maps, and researched through Wiki, it's LAUSANNE. A name I cannot see or say or hear without feeling the prickle of lust usually reserved for lovers. I was nineteen when I went to live there for the year. Have you ever longed for something and then when it eventually happens you discover that it's even better than your imaginings? I don't think that happens too many times in a lifetime, but it happened to me when I first went to Lausanne. After a golden year in a golden city I've returned again and again and it's always and never the same. I doubt I'll ever write another novel set in Lausanne, so this is it... Have I done it justice on the page? Along the way I've weeded out so much, because I've realised that just because it lives in my memory it doesn't mean it matters to the story. Slain darlings? You bet. One of the best things about writing is that you can take the things that you love, the things you hold dear, and make something new out of them. But a story built of cherished things is especially hard to let go of, and maybe that's why I feel... strange. 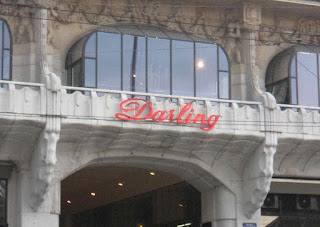 Darling: The comely facade of a Lausanne building.

Strange also because... of my characters. The people I've made up and who are, now, as real to me as anyone I know. Hadley and Joel and Hugo and Kristina... Have I told their story with 'all the truth and tenderness and severity' I'm capable of, as Katherine Anne Porter so perfectly says? God, I hope so. That moment when your characters finally feel fully-formed, a potent mix of pride and responsibility hits; the desire to do your best by them, and the hope that they'll go out into the world and be looked upon kindly, and be understood. There's some reconciling to be done too, between how they seem to me, the doting mother, and how they appear on the page. A final once-over, a kiss on the head, then out into the world.

So after finishing on Friday I felt strange on saturday and I felt strange on sunday and on monday I went to London and met lots of people and talked about the new book and began to feel more and more excited about it but, also, still strange. Today, as I write, I feel good. I'm sitting at my desk, wearing the same holey pink cardigan and listening to the same album that were my constants through the last month of writing but... something's missing. I don't have a 100,000 word document open. I'm not scribbling notes. I'm no longer trying to change the fates of people I've made up but are no less beloved for it. Soon I'll be checking copy edits, I'll see a cover, hold a proof in my hands, and then the book itself. But for now? It's still a little strange, and maybe I'm just learning that that's the way I like it.